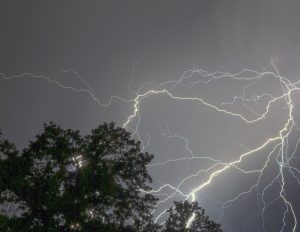 Monsoonal moisture moving up from the south will bring the potential for isolated to scattered thunderstorms with cloud to ground lightning and little rainfall, across portions of central and northern California from Sunday through Monday.

The thunderstorms would most likely develop over the Sierra Nevada, although isolated thunderstorms may also develop in the Mother Lode and the Central Valley. The best chance for thunderstorms will be on Monday.

Gusty and erratic winds are possible near any thunderstorms, with gusts around 40 mph.

Given the critically dry fuels, any lightning strikes may result in high probability of ignition. A rapid spread of fire is possible depending on the terrain and local wind conditions.