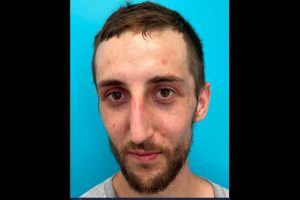 Sonora, CA–A wanted Sonora man tried to outrun Sonora Police Officers on a foot chase that took place in Walmart. On Monday, July 12th, during the 5 pm hour, Sonora Police dispatch received a phone call that a known theft suspect was in the store. The suspect was identified as 24-year-old Joseph Rizzuto of Sonora.

It was confirmed that he had four Felony Warrants for his arrest and was additionally named as a suspect from a burglary on June 29, 2021, in an incident where he eluded law enforcement and was covered here.

Officers located Rizzuto inside the business and a foot pursuit took place. With the assistance of a good Samaritan, who prevented Rizzuto from continuing to flee from officers, Rizzuto was arrested and taken into custody. Rizzuto was taken to Tuolumne County Jail where he was booked for his warrants and additional charges of resisting arrest and shoplifting. His bail was set at $95,000