Fugitive From Calaveras Chase That Erupted In Fire Caught 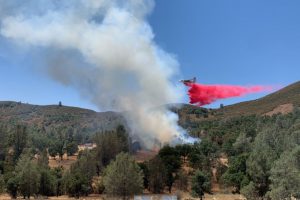 Calaveras County, CA – A suspect on the run since last Friday after a chase with CHP officers in Calaveras County that ended with the ignition of a vegetation fire has been captured.

Calaveras Sheriff’s Office spokesperson Lt. Greg Stark updated that the suspect was a male juvenile from Bishop in Inyo County. His name is not being released due to his age. Lt. Stark also detailed the car was a Dodge Dart that was stolen from there.

Friday’s (July 2) chase with CHP officers began around 11:22 a.m. on Jaquima Drive near Pool Station Road, between Angels Camp and Copperopolis. It ended when the driver abruptly, ditched the car, as reported here. Meanwhile, a fire broke out on the passenger side of the car and spread to half-acre of nearby brush, which was put out quickly by firefighters.

Sheriff’s deputies assisted in the incident and the passenger was apprehended within minutes, but the driver got away.  That prompted a search of the area with three K-9 units but ended with the suspect escaping capture.

Lt. Stark had little details regarding the driver’s arrest only noting that he was taken into custody on Tuesday, July 6, by Inyo County Sheriff’s Deputies without incident and will be transported to a juvenile detention facility there to face charges stemming from the incident.