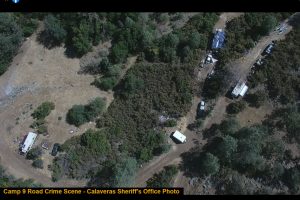 Aerial view of murder scene on Camp 9 Road in Vallecito

Vallecito, CA – A caller reporting a deceased male led to the arrest of a Vallecito man for murder.

The suspect, 55-year-old Donald Baldwin, is accused of shooting another man in the Camp 9 Road area of Vallecito in Calaveras County. The name of the victim, who is a 40- to 50-year-old male, is not being released pending notification of family, according to sheriff’s spokesperson LT. Greg Stark.

Investigators worked through the night and into mid-morning today processing the crime scene, which is located about four miles in from Parrotts Ferry Road just past the shooting quarry on a dirt road. They also interviewed five to ten witnesses, while evaluating and collecting evidence.

Lt. Stark details, “More than one shot was fired from a small-caliber weapon that was not a handgun.” He added that the two men were neighbors but regarding a motive, stated, “The motive is not being released at this time. The investigators still have some follow-up investigation to do and they don’t want to taint any possible witnesses.”

The crime scene was described as a site where numerous vehicles and trailers were present with Lt Stark calling it an “impromptu residential living area.” Due to electrical issues and the dumping of sewage, waste, and garbage, Calaveras Code Compliance was contacted. Also, one trailer had four dogs and 23 cats living in it, bringing Animal Control to the scene to round them up.

Baldwin was taken into custody without incident for murder and possession of a firearm and ammunition by a prohibited person.