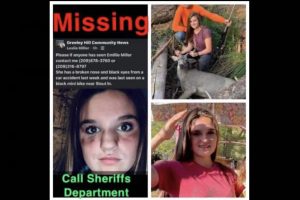 Update-The family has updated the status of Emillie Miller on social media, saying that she has been found and is safe at home. No further details have been provided.

The mother of Emillie Miller filed a missing person’s report with both Mariposa and Tuolumne sheriff’s offices as the family resides in Greeley Hill but her daughter was last seen riding her black minibike on Wards Ferry Road in Tuolumne County around 6 p.m. on Tuesday. A witness reported that it appeared the minibike had broken down. They saw her hitching a ride from a man in a white Chevy pickup heading towards Sonora.

Then this afternoon Miller says via Facebook another witness reported seeing Emillie at the Target store parking lot in Manteca. Leslie shared that her daughter has two black eyes and a broken nose after being involved in a vehicle collision last week. The woman described Emillie noting her injuries.

Leslie recounts that Emillie had been grounded from riding the minibike after returning to their Greeley Hill home after dark on it, which she is forbidden to do. She has not seen or spoken to her daughter since she took off on the minibike last night. The family asks the public to look at the pictures of Emillie in the image box and call either sheriff’s office if anyone has seen her daughter or knows of her whereabouts.