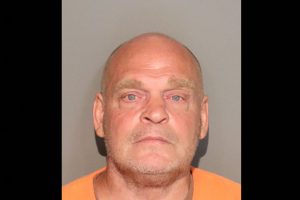 Calaveras, CA–On Saturday, June 26th at about 9:00pm, the Calaveras County Sheriff’s Office received a 911 call of a reported shooting in the 600 block of Ridge Road in Railroad Flat. The caller indicated that a person had been shot. The caller additionally reported that the person suspected of shooting the victim was still in the area.

Deputies responded to the area and located an adult male who was suffering from gunshot wounds, emergency medical personnel treated and transported him but he was pronounced dead while in transit to a medical trauma center. As the victim was being attended to by medical personnel, deputies responded to a residence east of the location of the shooting victim where they located Ralph McGaughran who had been identified as the suspected shooter. McGaughran was detained and later placed under arrest.

Detectives responded to the scene and learned that the three people who were involved in the incident each resided in separate residences on Ridge Road. The three residences were adjoining parcels, the shooting occurred on the property located directly between the properties of the suspect and the victim. Initial investigations revealed the suspect and the victim were known to each other and had been fighting over the location of some target shooting that was occurring on the property owned by McGaughran and was seen as a safety threat by the victim based on a previous incident.

During the investigation, it was additionally discovered that all three involved, suspect, victim, and witness were illegally growing marijuana. It is not believed that illegal cultivation is connected to the shooting. Evidence of an illegal butane honey oil extraction lab was seized from the property of McGaughran. After serving a search warrant on the three parcels, the Sheriff’s Office seized a combined total of 500 plants and over 40 pounds of processed marijuana.  The estimated value of everything seized is estimated to be over $300,000.