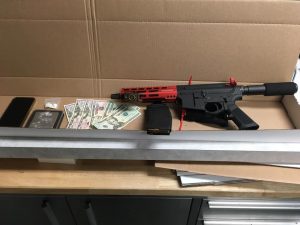 Tuolumne, CA–Early Sunday morning, a Tuolumne County Sheriff Deputy was patrolling the area of Tuolumne City. During his patrol, the Deputy spotted a vehicle with several equipment violations. The Deputy conducted a traffic stop on the driver who was 20-year-old Colby Hathcoat of Twain Harte.

Hathcoat was displaying symptoms related to being under the influence of narcotics, a search of the vehicle uncovered drug packing material, money, a digital scale, and a loaded short barrel AR-15 rifle. After questioning, Hathcoat admitted to concealing two grams of cocaine on his person. Hathcoat was arrested for being under the influence of drugs, drug sales, and weapon-related offenses.