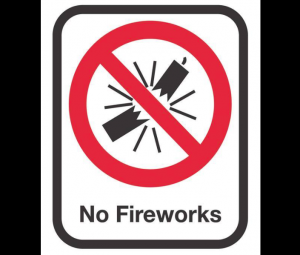 Sonora, CA — This year all fireworks are banned in Tuolumne and Calaveras counties, and CAL Fire reports its enforcement officers will be out looking for violators.

The prohibition includes those labeled “safe and sane.” Tuolumne County has had a fireworks ban for many years, but they have traditionally been allowed in parts of Calaveras County. However, both the Calaveras County Board of Supervisors and the Angels Camp City Council passed a ban for the current fire season, citing the very dry conditions, and high wildfire risk.

CAL Fire spokesperson Emily Kilgore reports that violators of fireworks laws are subject to a maximum penalty of $1,000 and a year in jail. However, the penalties can increase if large amounts of fireworks are confiscated, or if they start a wildfire.

Members of the public can surrender fireworks at any fire station without penalty.

CAL Fire indicates the only two large fireworks displays in the two-county region will be on Saturday, July 3rd, at 8pm. They will be at Lake Don Pedro and Pine Mountain Lake.