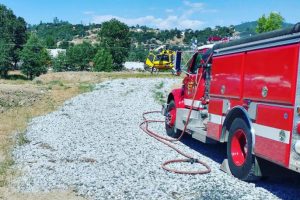 Over the 4-day weekend beginning Friday (May 28) and ending on Memorial Day, there were 79 incidents in the Department’s jurisdiction, compared to 60 in 2020, a jump of 19 additional incidents.  Assisting with those calls were members of CAL FIRE Tuolumne-Calaveras Unit.

TCFD officials recounted one call was regarding a boy under the age of twelve that nearly drown at a private pool in the Phoenix Lake area. In that instance, he was out of the water and breathing when firefighters arrived. The child was flown from the scene for medical treatment, but no update was available on his condition.

To end the weekend, late Monday night at the top of Twain Harte Grade on Highway 108, those same agencies assisted deputies from the Tuolumne County Sheriff’s office in making an arrest. It involved a man that became combative when being handcuffed for vandalism. He was placed on a $20,000 bail.