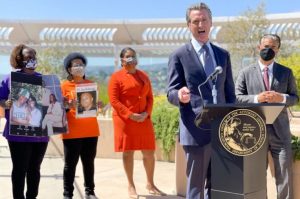 Sacramento, CA — The state is responding to a federal judge’s ruling that found the state’s assault weapons ban is unconstitutional.

In his 90-plus page ruling, US District Court Judge Roger Benitez defended the use of an AR-15 rifle, calling it “the perfect combination of home defense weapon and homeland defense equipment.” He compared it to a Swiss Army Knife. He argued that efforts to limit the possession of assault weapons are a violation of the Second Amendment to the US Constitution.

California Attorney General Rob Bonta, along with Governor Gavin Newsom, announced this morning that they are filing an appeal to the ruling.

Newsom pointed harsh criticism at Judge Benitez, stating, “We need to call this federal judge out. He will continue to do damage, mark my word. They (gun proponents) are judge shopping….this is a very focused effort to work through this judge, where the decision is already made before it is presented.”

The case could eventually go before the US Supreme Court, whom Newsom also criticized.

“This stacked court (US Supreme Court) went through a vetting process based upon pre-disposition to know exactly where they are going to land on a quote-un-quote expansive view of not only the right to bear arms, but a well-regulated militia.”

California’s ban on assault weapons has been in place for 32 years.

Judge Benitez’s ruling was praised by the National Rifle Association (NRA) which put out a statement arguing that restrictive gun laws do not make people any safer and infringe on the rights of law-abiding citizens.