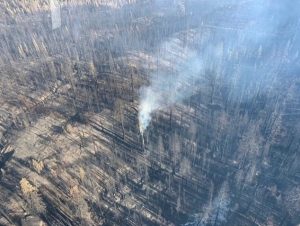 A new study looks at the impact of a wildfire last year in the Sierra Nevada that killed between 7,500 to 10,000 redwoods in the Sequoia National Park.

The Castle Fire in August of last year scarred over 130,000 acres and burned through 10 giant sequoia groves. The Associated Press reports that federal researchers determined that anywhere from 10-14-percent of the world’s giant sequoias were killed in the fire.

Researchers used satellite imagery to make the determination. Giant sequoias are fire-adapted and often resistant to wildfires. However, the built-up vegetation, and the high severity of the blaze, led to the destruction.

The Castle Fire ignited as a result of a series of lightning strikes in the Golden Trout Wilderness area.