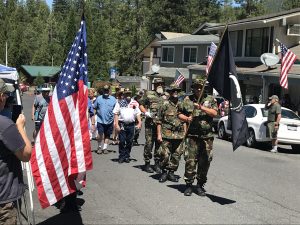 Twain Harte, CA — The Twain Harte community gathered this morning for a Memorial Day flag-raising ceremony to honor those who paid the ultimate sacrifice.

Sgt. Aaron Rasmussen with the VFW Post 4748 served as the Master of Ceremonies. The remembrance started with a brief parade along Meadow Lane towards the downtown arch. It was led by the Color Guard followed by a convertible escorting highly decorated local veteran, Lt. Denny Thompson, a veteran Pilot/Bombardier. (Click on the video box to see his entrance).

The VFW shared with Clarke Broadcasting details about Lt. Thompson’s service. He flew and served in the 8th Air Force as a 1st Lt. Pilot-Bombardier for 30 lead missions in B-24 and B-17 four-engine bombers. He was part of the 487th Heavy Bomber Group of the 839th Squadron based at Lavenham, England where he was stationed from April 12 to December 30 of 1944. He flew his sixth mission on D-Day in 1944, when he bombed a German headquarters at Liseux, France. In 2017 he was awarded France’s highest military honor for World War II, the French Legion of Honour (Chevalier). The medal ceremony was at the French Consulate in San Francisco.

Today’s ceremony in Twain Harte also featured the Vietnam Veterans of America presenting a retired flag to the family of Troy Galloway and a Second Coffin Flag folding presentation was done in honor of the late Doug Halvorsen. In addition, there was a reading of the poem, “A Soldier Died Today.”

The event featured the National Anthem and other Patriotic songs performed by Summerville High School’s Jazz@8 (click here to view a video). The local Cub Scout troop 513 was in attendance handing out American flags and cookies.

Click on the photo box to view numerous scenes from the event.