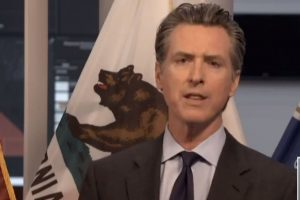 Newsome was Thurday’s KVML “Newsmaker of the Day”. Here are his words spoken at a brief press conference.

“I thank the Sheriff, the Mayor and all the men and women in uniform. You’re going to learn over the course of the next number of days and weeks about the heroism of the San Jose police saving lives and the deputy sheriffs that ran quite literally, ran moments after, seconds after hearing about this incident without any consideration of their own lives and did an extraordinary job to save other people’s lives.

It wasn’t that long ago I was standing out here talking about the tragic loss of two children, one in a mother’s arms at the Gilroy Festival, just here in this community down in Southern California and San Bernardino. Remember, a few years prior in Santa Barbara, you know, pick a state and here we are in the United States of America. We’re experiencing something just is not experienced anywhere else in the world. There’s a sameness to this and that numbness.

I think it’s something we’re all feeling, all of us gathered here today. Looking at this scene, the (leaders) speaking similar tone in terms expression of condolences, all the right emotions and perhaps the right words, but it begs the damn question, what the hell is going on in the United States of America? The hell is wrong with us? And what are we going to come to grips with this? What are we going to put down our arms, literally and figuratively? Our politics, our stale rhetoric, finger pointing, all the hand wringing, consternation that produces nothing except more fury and frustration. More scenes like this repeated over and over and over again.

I say that not as a Governor. I say that as a father of four, I say that as a member of this community who cares deeply about it. So we’ll have time to work through all of that. But one thing I just wanted to briefly speak to is the pain in those victims. I just spent, we just had the privilege spending the last few hours with the victims that are waiting to just learn if their loved one is still alive. They’re dialing the phones, they can’t find it. They’re trying to go on, find a phone of a loved one, waiting here from the coroner, waiting to hear from any of us. Just desperate to find out if their brother, their son, their dad, their mom is still alive. Just imagine being in their foot.

I know everybody wants all the answers to all these questions, but there’s no more important question and no more important answers that we owe than the victims of this senseless and tragic shooting. And so, I’m not just going to express my condolences. I’m not just going to express the usual platitudes, but let me just thank the heroism of those victims, the fact that I can’t even stand up and support one another, is remarkable. What a human act.

And so I just want to we just want folks to know that we’re gonna be there for the victims. I want folks to know I’m here for you Mr, Mayor and the County, the State. And I know we have elected officials of all political stripes who want to be here for this nation, but it’s time to deal with the endemic before this pandemic of gun violence, the pre-existing condition, that somehow was sort of pushed aside last year, but now has raised its ugly head again this year and wake up to this reality and take a little damn responsibility, all of us to do a little bit more and a little bit better this time and move beyond the platitudes and the usual rhetoric that tends to mark not just these moments, but the aftermath of these moments. As all of you go away and this fades out of view and then we rinse and repeat someplace else in this country.

So again, to the victims, to those who lost their lives and the families lost their loved ones. Yes, our hearts go out, but we are resolved to not make this meaningless, but to bring meaning that this tragic moment in our state and our nation’s history. Again, thank you to all the men and women behind me in their courageousness and the incredible, incredible bravery that was demonstrable of the men and women of our San Jose Police Department and Sheriff’s office”.