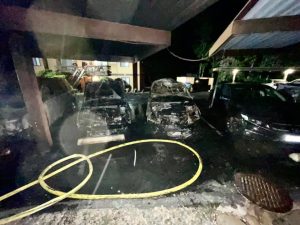 Sonora, CA–On early Sunday morning(May 23rd)at 12:30 am, firefighters from TCFD, CAL FIRE TCU, and Sonora Fire Department were dispatched to a reported vehicle fire at Quail Hollow Apartments on Chukar Circle. Once fire crews arrived, four vehicles were ablaze with a 5th vehicle threatened. Firefighters quickly put out the flames and prevented the fire from spreading to the fifth vehicle or into the occupied apartment buildings.

One resident had minor injuries trying to escape the flames, that person was evaluated inside a Tuolumne County Ambulance and decided not to go to the hospital. Clarke Broadcasting reached out to Tuolumne County Fire Investigators but no further information could be given due to the ongoing nature of the investigation.