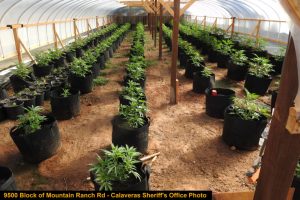 One of four pot bust in Calaveras County last week

Update at 1:15 p.m.:  Clarke Broadcasting made inquires Wednesday regarding one of the illegal marijuana grows on Mountain Ranch properties raided where Child Protective Services (CPS) was called to the scene. It was located in the 9500 block of Mountain Ranch Road. We asked for further details related to the number of children found, their ages and gender.

Calaveras Sheriff’s spokesperson Sgt. Greg Stark responded today that there were a total of 4 children: two females ages 15 and 7; and two males ages 2 and 1. He added that CPS did not take them into custody. Instead, Sgt. Stark says, “They allowed outside family members to remove the children from the property.”

Further details on the raids are below.

The raids happened over two days, Thursday and Friday (May 13 & 14), of last week. The first one conducted by the Calaveras County Sheriff’s Office Marijuana Enforcement Unit was in the 3000 block of Tree Lane in Wilseyville. An estimated $539,000 worth of marijuana was found at the illegal grow. In all, deputies seized 765 pot plants and 6 pounds of processed marijuana with no suspects at the site.

Later that day, a search in the 11000 block of Pattison Road in Wallace turned up 367 plants worth over $256,000 and three firearms. An illegal marijuana cultivation citation was issued to 58-year-old Miguel Linarez who was found on the scene.

Then on Friday, two additional raids in Mountain Ranch brought in the largest pot seizures with nearly 4,000 plants confiscated. A search in the 10000 block of Ham Luddy Lane netted 1,996 plants in excess of $1,397,000, but no suspects. A short while later in the 9500 block of Mountain Ranch Road another 1,989 plants worth about $1,328,000 was seized along with a firearm. Arrested at the site was 31-year-old Theav On of Stockton, whose charges included willful cruelty to a child. Sheriff’s officials did not reveal the age, gender, or number of children discovered at the site. Child Protective Services was called to the scene due to safety concerns stemming from hazardous electrical issues inside the residence, which was an unpermitted structure.

Anyone is encouraged to report an illegal marijuana operation and you do not have to give your name if calling (209) 754-6870, the Sheriff’s Office Anonymous Marijuana Tip Line.