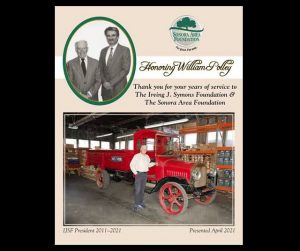 Sonora, CA — The Sonora Area Foundation is thanking two of its board members for their service to the community.

Retired Judge Bill Polley and retired healthcare manager Tracy Russell are stepping down from the board of directors.

Polley has lived and worked in Tuolumne County since 1970 and raised four children with his wife Carol. They now have nine grandchildren. Early on, Polley was a personal attorney and advisor for local philanthropist Irving J. Symons, the founder of the Sonora Area Foundation.

Polley was later appointed Superior Court Judge by Governor George Deukmejian in 1989. After retirement, he became a member of the Irving J. Symons Foundation Board, and later the Sonora Area Foundation Board.

Kate Powell Segerstrom, Tuolumne County Superior Court Judge, says, “I know Irving Symons thought very highly of Bill, and I am confident Irving is very grateful for Bill’s decades of contributions to our county on so many levels.”

Russell and her husband Hank moved to Tuolumne County in 1998. They have three children and five grandchildren. Following a 25-year career with Kaiser Permanente, she was active with advisory boards for Sonora Regional Medical Center, Sierra Conservation Center and the Sonora Parks, Recreation and Beautification Committee. She joined the SAF Board 10 years ago and has served as VP for the past six.

SAF Board President Carey Haughy reflects, “I have found Tracy such a joy to work alongside as vice president of the Sonora Area Foundation board. Her ten years of service have gone by in such a flash! Tracy’s background in health services coupled with her comprehensive knowledge of the Tuolumne County community have uniquely positioned her to be a great asset to the board during tough decision making about which grants to award.”

Haughy adds about Polley, “I didn’t know Bill well when I initially joined the Sonora Area Foundation board, but I was a bit in awe of his reputation. As I have gotten to know him, I have found it to be justly deserved. Bill doesn’t always speak a lot, but what he has to say is worth listening to, along with being well thought out and carefully worded. He is wise, respectful and respected, and a great example of a true gentleman.”

The Sonora Area Foundation, along with two supporting organizations, the Irving J. Symons Foundation and The Symons Family Fund, has assets of more than $57 million. The Foundation holds and administers more than 200 charitable funds set up for a variety of charitable purposes and educational scholarships.