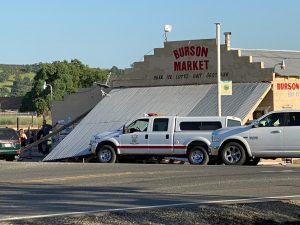 Burson, CA — A Modesto man was arrested for DUI following a crash that sent a man to the hospital and damaged a Calaveras County business.

The CHP reports that 34-year-old Gabriel Fernandez of Modesto turned his Nissan Murano from Burson Road onto Highway 12 directly into the path of an oncoming tow truck driven by Sammie Franks of Angels Camp. The tow truck then hit a support structure for the overhang at the Burson Market, causing it to collapse. A Chevrolet pickup truck under the overhang, and a Toyota Tundra in the parking lot, also got caught up in the crash.