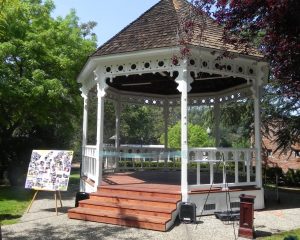 Gazebo at Rocca Park in Jamestown

Jamestown, CA — Deputies responded to Rocca Park in downtown Jamestown because a man was yelling and causing a disturbance.

The sheriff’s office reports that 45-year-old John Hosek of Jamestown also yelled obscenities at the responding deputies and refused orders to lay face down on the ground. He then allegedly took a boxing stance and challenged the deputies to a fight. A physical fight broke out and a deputy used a taser, but it was ineffective. Hosek was able to remove a taser probe from his body and threw it at one of the deputies. It struck the deputy in the face and caused minor injuries. Hosek was eventually placed into handcuffs and then a WRAP body restraint system.

After being transported to Adventist Health Sonora for a medical evaluation, he was booked into Tuolumne County Jail on various charges, including battery on an officer, resisting arrest which caused injury to an officer, and a parole violation. The incident happened on Tuesday afternoon.