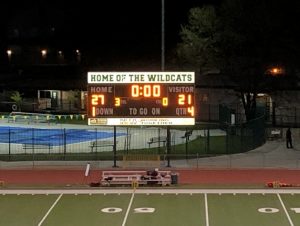 Sonora, CA — The Sonora Wildcats were able to close out their season undefeated with a 27-21 win over Calaveras. Sonora started their first and last home game of the 2020-2021 season by recognizing both teams’ senior players in a touching display of solidarity and sportsmanship.

The Wildcats received the kickoff after a Calaveras deferral and were able to move the ball down the field with a 40 yard pass from quarterback Bradley Curnow to wide receiver Gabriel Milbourn. Ultimately unable to score a touchdown, Sonora relied on kicker Tim Blackmore to split the uprights with an impressive 25-yard field goal giving Sonora a three point lead.

Solid defense put the ball back in the hands of the Wildcats who took the ball down and scored on a 25 yard pass from Curnow to Milbourn. Calaveras answered by returning the ensuing kickoff for a quick touchdown. A strong series of mostly running plays led by Andrew Matlock was capped off with a broken tackle and touchdown on a 5 yard punch-in by Matlock. A short kickoff allowed Calaveras to answer with their second touchdown. Another long series of plays saw the Wildcats within scoring range only to have the ball stripped from Matlock and end up in the arms of lineman Erin Greenway who, with only a moments hesitation, ran the ball in for a touchdown.

Getting the ball back after shutting down the Calaveras offense on the following drive, Sonora was only able to answer with a final field goal from Tim Blackmore.  Another defensive stop and effective clock management allowed Sonora to maintain their lead until a critical late fumble gave Calaveras the ball with a short field.  Calaveras quickly capitalized with a 45 yard touchdown strike down the sideline to bring the game within 6.  With the game on the line, the expected onside kick was picked up by wide receiver Gabriel Milbourn to secure the victory and seal the short undefeated season.

Sonora looks forward to seeing many players return next year in what looks to be a promising season for them later in 2021. The Black Oak Casino player of the game was senior running back Andrew Matlock.

The Sonora Wildcats games air live on STAR 92.7, with Nick Stuart and Zeb Drivdahl. The Summerville Bears can be heard on 93.5 KKBN with Levi Flores and Mike Woicicki as your hosts for all the action.