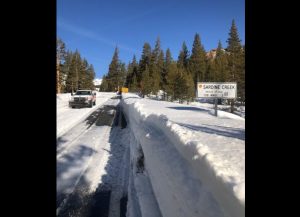 Sonora, CA — With a lack of snowfall over recent weeks, Caltrans reports that crews are busy working to clear seasonal mountain passes.

It remains unclear when Highway 108 Sonora or Highway 4 Ebbetts passes will reopen for the season, but progress is being made, indicating it could come early this year. Precipitation is unlikely over the next two weeks, according to the latest weather forecast.

Last year Sonora and Ebbetts passes reopened for the season on May 15 and Highway 120 Tioga Pass reopened in late June.