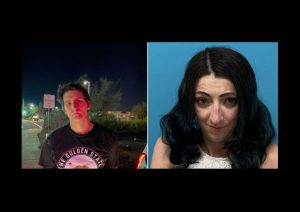 Sonora, CA — It took some extra effort to arrest two suspects, but the Sonora Police Department reports that they were both booked into Tuolumne County Jail.

The PD received a call that 24-year-old Zalena Herrera of Modesto was inside the local Lowe’s store after previously being trespassed from the business. When an officer arrived, she ran out the back door and set off an alarm.

An hour later she was spotted in the passenger seat of a Honda Civic which was circling the parking lot. An officer pulled the car over, and the driver, 26-year-old Charles Bryant of Modesto, took off running, and left Herrera inside. She was arrested while officers searched for Bryant.

He was located later walking in the area of Mono Way near Greenley Road and was captured following a short foot chase. He already had a felony warrant out of Stanislaus County for vehicle theft.

Inside their Honda Civic officers found several hundred dollars in stolen merchandise from various retailers. Aspects of the investigation are ongoing, and the Sonora Police Department is asking retailers who believe they were targeted by the pair to contact the office at 532-8141.