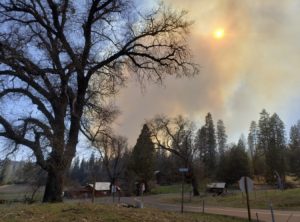 Update at 6:05pm: Crews are making good progress stopping the 50 acre Line Fire in the Hell’s Hollow area. The Tuolumne County Sheriff’s Office reports that the earlier evacuation advisories for Hell’s Hollow Road and Short Line Road are now lifted. The cause of the fire remains under investigation. Crews will remain on the scene throughout the evening working to mop-up and extinguish the fire.

Update at 6pm: CAL Fire reports the so-called “Line Fire” remains 50 acres in size. It is burning in the Hell’s Hollow area. The earlier mentioned evacuation advisories remain in place.

Update at 5:35pm: The Tuolumne County Sheriff’s Office has issued an evacuation advisory for an area near a 50 acre fire in the Hell’s Hollow area outside of Groveland. The advisory is specifically for Hell’s Hollow Road and Short Line Road. There are no road closures at this time.

Original story posted at 4:55pm:Groveland, CA — Officials are on the scene this afternoon of a 50 acre fire in the Hell’s Hollow area outside of Groveland.

CAL Fire reports that no structures are currently considered at risk as it is in an isolated area. Be prepared for activity in the area and smoke coming from Hell’s Hollow Road. There is no containment as of 4:55pm.

A special thanks to Shelly Davis-King and Jennifer Teem for submitting photos. Pictures can be emailed to news@clarkebroadcasting.com.