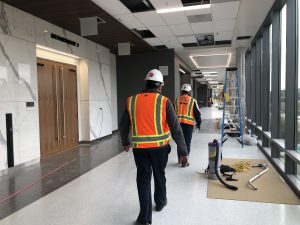 Sonora, CA – There is still plenty of activity as workers with hard hats busily install the final touches to the new $65-million Tuolumne County Courthouse.

“Getting excited and more and more real,” said a smiling Hector Gonzales court CEO. He along with the contractor, Turner Construction’s Site Project Manager Steven Fields gave Clarke Broadcasting a tour of the new building housed on the new law and justice center site off Old Wards Ferry Road.

The project is 80,000 sq. ft. with 61,000 square feet of usable space, according to Gonzales. He also noted that it is not a county, but a state-building and the largest one in the county. It has four floors with as many stairwells and elevators. Fields added they tried to use local businesses wherever possible and noted that all the windows were installed by Nor-Cal Glass in Sonora and most of the workers, averaging 65 daily and 110 at the height of construction, are Californians.

There are five courtrooms, the largest for criminal proceedings is pictured below. It is equipped with state-of-the-art monitors and technology, allowing for all to see and hear the proceedings, including a close-up view of presented evidence.

Another local feature, the stone wall backdrops behind the judges’ benches. Fields details, “This stone is from the Blue Mountain Minerals quarry in Columbia. It was blown out and milled out into several sized squared shapes with different thicknesses. Each courtroom has a different design. Also, there are natural “magnifying” skylights in the ceiling that can be closed by a switch if too bright.”

One major improvement from the old courthouse, as pointed out by Gonzales, “We will have the persons being brought in from prison and jail brought into courtrooms where they won’t mingle with the public, which they currently do now.” He stressed that can be challenging, especially when a suspect comes face to face with a witness. 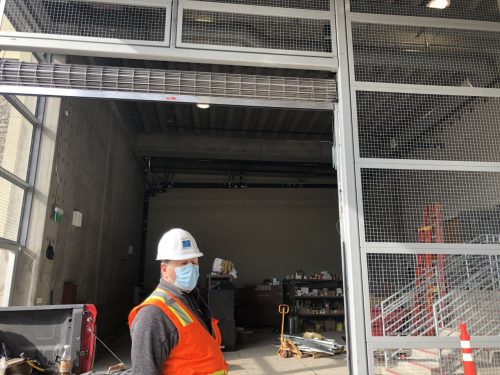 In the new facility, inmates will be brought over in vans and dropped off via a sally port, and taken to a holding cell. As parking is always an issue at the old downtown Sonora courthouse, judges will have a secure gated parking facility inside the structure, and courthouse staff will have an electronic gated parking lot as well. (Additional pictures in the image box.)

Next to the courtrooms are four murals with different themes depicting the county including mining, timber, and two photo collages of the old courthouse.

Noting that nostalgic, Gonzales remarks, “It’s bittersweet in that we are going to lose a little bit of the history and the charm of the old courthouse, but we’re going to gain so much in the ability of the public to come to here with more space.”

Construction is slated to be completed in mid-May, leaving more than a month to add the finishing touches before the Monday, June 28th first day of operation, according to Gonzales.

Other features include; a sheltered bus stop, eight public service counters to shorten wait times, offices for a lawyer facilitator and mediator for family court, an official county law library and self-help center, and two jury deliberation rooms with plenty of space, a refrigerator, vending machines, and private restrooms. For a virtual video tour and additional pictures of the new courthouse click on the image box.