Tuolumne County Has A New D.A. 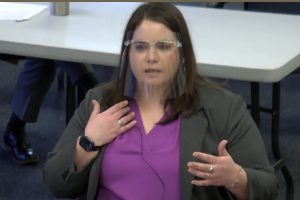 The supervisors interviewed them on their goals, top priorities, innovation, and leadership skills. After nearly, five hours of questioning, the person’s name that was brought up by all five supervisors as a top candidate was Jenecke. She has worked in the D.A.’s office for the past six years and told the board, “The decision you make today is not about our past it is about our future. I would submit to you that I have the experience, support and the passion to be the district attorney for Tuolumne County for many years to come.”

Jenecke outlined her top five goals for the next two years and as she put it “hopefully beyond.”  It included developing and implementing a diversionary program, get national accreditation for Sunshine House, which is a crime victims program, become a paperless office for efficiency and decrease costs, apply for additional revenue streams, such as federal grants, and decrease employee burnout while increasing employee retention. That answer earned Jenecke praise from all the board members including District 4 Supervisors KathleenHaff, who also asserted, “I look for long-range planners. I look for people who have a vision and can inspire others to follow. I think she exhibited that better than anyone else. I was very convinced by her answers.”

In the end, the board voted 5-0 in favor of Jenecke filling the remaining two-year term of former D.A. Laura Krieg who was elected last March as a Superior Court Judge for the county, as reported here.