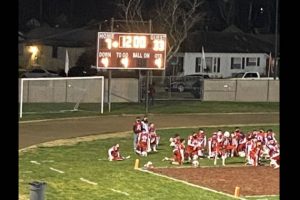 Merced County, CA — The Sonora Wildcats pulled off a solid 33-7 victory against the Gustine Reds Friday night as the two teams faced each other for the first time in history.

Sonora took an early lead with an impressive 20-yard strike from quarterback Bradley Curnow to wide receiver Gabriel Milbourn. Meanwhile, the Wildcats defense led by linebacker Kyler Hanks was able to keep the Reds scoreless until the final moments of the first half.  With a 19-0 lead and six seconds left, Gustine scored on a two-play drive set up by a short Sonora kickoff and defensive penalty, narrowing the score to 19-7 at the break.

After starting the second half with an impressive drive deep into Sonora territory, the momentum swung back to the Wildcats when a fourth and goal throw was picked off by defensive back Clay Wooldridge and returned all the way to the Gustine 35-yard line.  After dueling turnovers, the Wildcats finally punched the ball in on a touchdown reception to wide receiver Colby Bouchard. A late touchdown to Gabe Milbourn sealed the game and the win for the Wildcats.