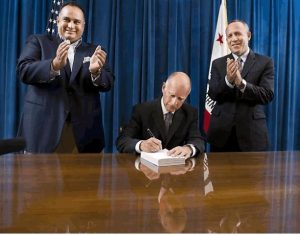 Building on international agreements with China and Quebec to combat climate change, Governor Jerry Brown joined the Governors of Oregon and Washington and the British Columbia Premier by teleconference to sign a regional agreement to strategically align policies to reduce greenhouse gases and promote clean energy.


“California isn’t waiting for the rest of the world before it takes action on climate change,” said Brown. “Today, California, Oregon, Washington and British Columbia are all joining together to reduce greenhouse gases.”

The pact seeks to enhance cooperation through a range of activities, including:

• Accounting for the costs of carbon pollution in each jurisdiction;

• Taking steps to expand the use of zero-emission vehicles, aiming for 10 percent of new public and private fleet vehicle purchases by 2016;

• Enlisting support for research on ocean acidification and taking action to combat it;

• Adopting and maintaining low-carbon fuel standards in each jurisdiction; and

• Continuing deployment of high-speed rail across the region.

Earlier this month, the California Air Resources Board announced an agreement with Quebec outlining steps and procedures to fully harmonize and integrate their cap and trade programs. Signing the agreement is the latest step in a process to link the two jurisdictions that began more than five years ago.

In April 2013 the Air Resources Board adopted a regulation setting January 1, 2014 as the start of the linkage, which will enable carbon allowances and offset credits to be exchanged between participants in the two jurisdictions’ programs. The linked programs will provide a working model for other states and provinces that are seeking cost-effective approaches to reducing their greenhouse gas emissions.

In September, Governor Brown joined China’s top climate official, National Development and Reform Commission Vice Chairman Xie Zhenhua, to sign a first-of-its-kind agreement on climate change between the commission and a subnational entity. This followed landmark partnerships established earlier this year on the Governor’s Trade and Investment Mission to China, including agreements signed with China’s Minister of Environmental Protection Zhou Shengxian to improve air quality and with Jiangsu province to promote renewable energy.