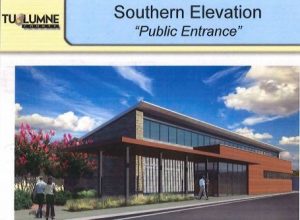 Sonora, CA– The Tuolumne County Board of Supervisors viewed plans for the new Sonora Juvenile Detention Facility on Tuesday.

Chief Probation Officer Adele Arnold says, “The operational needs and associated costs for the Mother Lode Youth Facility have decreased based on fewer juveniles in need of detention and state projections for fewer youth in custody.”

She says in Tuolumne county, “Within the last 6 months, we have averaged 8 [juveniles] in custody serving an average of 18 days.”

The new facility is planned to have a capacity for 30 beds, with a second 30 bed expansion but it is now proposed to be opened and staffed for 10 beds. Additional space will be contracted out to Calaveras and Amador and then to other counties as needed.

Arnold says, “Fewer juveniles need secure detention due in part to an increase in broad utilization of effective evidence based programming which has allowed youth to remain in the community while receiving rehabilitation services.”

Arnold says they will be bringing the Juvenile Detention Facility plans to several meetings with various state funding and construction planning boards in Sacramento this December. In March of 2009 the County was approved for a $16 million state grant to build the facility. The grant is part of SB 81 and according to Arnold involves a lengthy process to finalize the plans. Bids and construction will begin after approval at the Justice Center Property off Old Wards Ferry Road. The facility is scheduled to open no later than December 2015.

A recommendation for increased funding was also submitted to the Board for the new facility as well. The report calls for “the Board to add another $367,000 to the County Capital Budget this fiscal year or in early 2014-15 to fully fund the construction management activities related to the new facility which should be awarded in Spring 2014.” The report also calls for another $1.5 million to be set aside in FY 2014-15 and FY 2015-16 in order to equip the new facility” In addition the report states, “Tuolumne County’s net funding (commitment of General Fund operational dollars) for youth detention will need to increase by $209,000 from $298,000/year to $507,000/year starting in 2015-16.”

The total cost of the facility was estimated $18.4 million including a $1.4 million contract with the group HMC architects. Details of the proposed budget changes are in a pdf here.