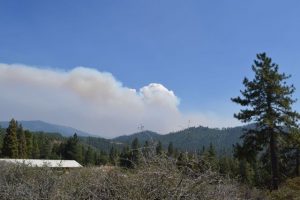 Tuolumne County, CA — They are called the Burned Area Emergency Response Team or BAER and their job is to make an emergency assessment of the landscape and emergency stabilization of it. The team is part of the second phase of wildfire rehabilitation crew working with the U.S. Interagency Fire Response Team battling the Rim Fire. There are about 70 soil scientists, botanists and hydrologists analyzing the fire area.

Here are the Baer Team’s definitions of the three phases of wildfire rehabilitation:

Fire Suppression Repair is a series of immediate post-fire actions taken to repair damages and minimize potential soil erosion and impacts resulting from fire suppression activities and usually begins before the fire is contained and before the demobilization of an Incident Management Team. This work repairs the hand and dozer fire lines roads trails staging areas safety zones and drop points used during fire suppression efforts.

Long-Term Recovery and Restoration utilizes non-emergency actions to improve fire-damaged lands that are unlikely to recover naturally and to repair or replace facilities damaged by the fire that are not critical to life and safety. This phase may include restoring burned habitat reforestation other planting or seeding monitoring fire effects replacing burned fences interpreting cultural sites treating noxious weed infestations and installing interpretive signs.

Haynes explains, “This second phase is designed to take place and put tools in place before we get the first major storms. So in this case, that will be before November and December, that we’ll have some tools on the ground and in place to prevent those major sediment or debris flows.”

The Baer team will release its findings in a report seven days after the Rim Fire is fully contained. That report will include a Soil Burn Severity Map showing the worst hit areas by the flames.