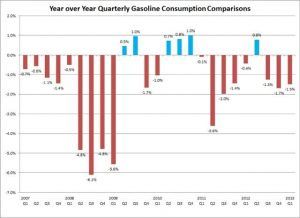 
A new report released by Board of Equalization member George Runner shows that gasoline consumption declined 1.5% in the first quarter of 2013, when compared to the first quarter of last year. Californians used an estimated 3.5 billion gallons of gas during the first three months of this year.

The price of gasoline was cheaper this year, averaging $4.00 a gallon during the first quarter, compared to $4.06 during the same period last year.

However, the amount of diesel fuel consumed during the first quarter of this year increased by 3.8% to 619 million gallons. The average price for a gallon of diesel declined six cents to $4.22.

The BOE estimates that gasoline tax related revenues for the first quarter are $424 million in sales tax and $1.26 billion in excise tax.