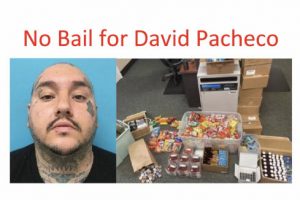 Sonora, CA – Carrying signs and handing out flyers like the ones in the image box are what protestors plan to do tomorrow in an attempt to keep the suspect of an alleged sex for drugs operation involving kids behind bars.

As first reported here by Clarke Broadcasting, 30-year-old David Pacheco was arrested at the end of last month after a raid of his Crystal Falls home revealed an elaborate scheme involving the social media site Snapchat where he would entice kids by trading them drugs for sex and explicit photos, according to Tuolumne sheriff’s investigators.

The exchange involved more than 100 local minors ranging from 8th grade to high school. At the time of his arrest sheriff’s officials noted, “This is probably one of the worst cases that we have had to investigate recently.”  Pacheco faces 32 felonies including rape.

Bunnie Mangano, one of the organizers of the event, who also knows one of the victims, relayed, “It’s heartbreaking,” adding that the girl is staying with relatives because “she is afraid to come home if Pacheco gets out on bail.”

The protest at the Tuolumne County Courthouse in downtown Sonora is from 10 a.m. to 2 p.m. and organizers encourage the public to attend. Pacheco is due in court at 1:30 p.m. for his arraignment. Mangano is angry that Pacheco was on post-release community supervision after being released from state prison for a conviction county investigators have not disclosed.

“If they would have kept him in jail his first time,” asserts Mangano, “a hundred kids wouldn’t have been receiving drugs.”

The protesters plan to raise their voices so not only Pacheco can hear their “cries for justice” inside the courtroom, but the judge as well. Pacheco is currently being held on $250,000 bail, meaning he will have to put up $25,000 to be released.

Mangano’s goal, “I want to make sure he does not get out of jail. I don’t want him loose; nobody’s child is safe with this man loose. And it will be easy for him to put up the bail money because he has all of the money, he got from selling drugs to our children.”

That is an issue the district attorney’s office is also concerned about. They have entered a motion to put a hold on his bail to make sure he cannot use funds obtained through illegal drug sales to pay it, which is expected to be addressed at tomorrow’s arraignment.

“He’s preying on our young at a time when they are most vulnerable because of COVID I believe,” charges Mangano. She is worried about the impact on the victims, adding, “This isn’t something they [victims] get over easily. This is something these children carry for the rest of their lives.”