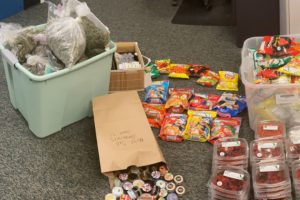 Drug items seized including colorful packaging and in vape pens

Sonora, CA – A local man’s elaborate operation using the social media app Snapchat, frequented by kids, and enticing them with drugs in trade for sex acts and explicit photos has been shut down.

“Absolutely shocked,” stated Tuolumne County Sheriff’s spokesperson Nicco Sandelin. “This is probably one of the worst cases that we have had to investigate recently.” He added, “This specific case is extremely concerning for us. We have juveniles in our community who are being targeted for drug use and sexual acts. It’s very concerning.”

Earlier this week, Clarke Broadcasting made inquiries into Tuesday’s arrest of 30-year-old David Pacheco, today Sandelin detailed that following up on a tip regarding “suspicious behavior” by Pacheco the sheriff’s High-Risk Supervision Team (HRST) raided his home in Crystal Falls, including his vehicle and a storage unit. What that behavior was Sandelin did not have specifics.

Sandelin divulged that based upon the suspect’s phone records and interviews with him, Pacheco sold the drug items pictured in the image box to “more than 100 local minors ranging from children in 8th grade through high school.” He disclosed how Pacheco’s bust came about, crediting School Resource Officer Deputy Ashely Boujikian with assisting in the investigation. “She helped identify some of the members within that Snapchat group as students of our local schools. Deputy Boujikian then set up interviews and spoke with a variety of students that were associated with this incident.”

Those interviews helped to uncovered how Pacheco was using Snapchat “to send and receive sexually explicit images and videos with juveniles in exchange for marijuana products. He also engaged in sex acts with minors in exchange for drugs.” Regarding the photos, Sandelin relayed, “What he did with the photos we don’t have all the details surrounding what he did with them once he got them that is still being investigated.

While details on exactly how he was able to attract the students remain under investigation, Sandelin reveals, “Ultimately, kids became aware of his Snapchat account information and what he was doing and that is how they got in contact with him.” What he was charging for the drugs Sandelin did not know.

Pacheco admitted to the scheme that had been going on since October, telling investigators that juveniles had to “verify” themselves by sending a video of themselves smoking pot before he would allow them into his private chat. Sandelin described how the money for pot exchange worked, “The student would put the money in their mailbox. Pacheco would arrive, take the cash and leave the marijuana product.”

With more kids home because of distance learning due to the COVID-19 pandemic, sheriff’s officials warn parents to be vigilant. They offer these tips:

Pacheco was arrested for possession of a narcotic for sale, selling marijuana to a minor, possession of child pornography, and commission of sexual acts with a minor. As this is an ongoing case involving sensitive information, no further information is being released, stated Sandelin. He added, “There is the potential that there will be more charges associated with this, but no further arrests at this time.”