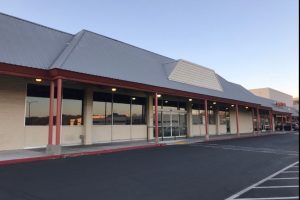 The building, located in the Sonora Plaza Shopping Center on Mono Way, is between the new Wilco Farm Store, slated to open this spring, and the Be Wok restaurant. City officials tell Clarke Broadcasting that the retailer submitted its application on Dec. 14th.

Currently, the city hired, Interwest Consulting Group, is in the second round of the code compliance review, which looks at accessibility, building, and life safety. The first round brought about changes to the outside façade, including moving some windows to make the entry look different from Cost-U-Less, state city development officials. Also, required was a sidewalk replacement, a “bi-parting” entry door [sliding door] to modify the existing opening.

Shopping center officials had already put in for a design review permit for the outside façade in November and at that time the city reported a possible new tenant but did not release their name, as reported here with the draft pictures. Additionally, the retailer has requested to change the former tenant’s indoor space into the Harbor Freight store model. Those plans are also being reviewed.

If additional changes to the exterior or interior are needed the retailer is required to make the corrections and resubmit the design plans again. Once approved a permit can be issued. City development officials say they have not received any timeline from the store and no contractor has been named but note that when the permit is issued construction can begin immediately.

On Harbor Freights website it states that the family-owned business began in 1977. Adding that “from hand tools and generators to air and power tools, from shop equipment to automotive tools, it offers more than 7,000 tools and accessories” in over 1,100 stores nationwide.