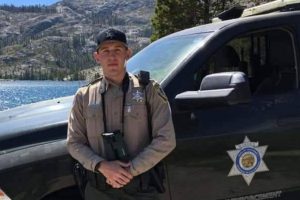 Valley Springs, CA – The CHP has identified the motorcycle rider that died after a two-vehicle crash Sunday afternoon in the Valley Springs area and speed was a factor.

He is 24-year-old Michael DeMasters, a California Fish & Game Warden whose work area included Valley Springs and San Andreas. As earlier reported here, DeMasters was ejected from his Kawasaki motorcycle after being hit head-on by a Chevy Camaro on Double Springs Road, west of Highway 26. The CHP reports the driver of the car, a 17-year-old whose name is not being released as he is a juvenile, was speeding and allowed the car to drift into the oncoming traffic lane on a curve.  DeMasters was pronounced dead at the scene.

In remembrance of DeMasters, the Calaveras Consolidated Fire Protection District posted on Facebook the picture in the image box and this statement that firefighters are “mourning the loss of our Local Fish & Game Warden, Michael DeMasters…A friend to all of our firefighters, we send our sympathies and condolences to Michael’s family.”