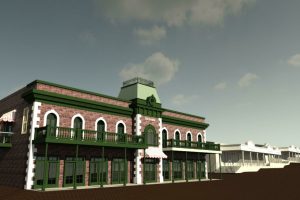 Sonora, CA – The Sonora Planning Commission gave its approval for one new construction project and two businesses to expand their products.

At its meeting this week, in a 3-0 vote, the commissioners recommended the city council approve an amendment to the Hazy Bulldog Farms, LLC marijuana dispensary on Mono Way to sell recreational pot. The city council approved the change to allow limited adult sales in November, allowing up to three different dispensaries in the city.

Sonora Community Development Director Rachelle Kellogg tells Clarke Broadcasting this is the first step because their use permit will come back for a second look when the dispensary moves two doors down into the Gold Country Kitchen and Bath Store, as that business moved downtown. With this approval, Kellogg says that leaves two more spots open. She details, “So we have the Bract House (marijuana dispensary). It was approved previously. They’ve expressed some interest as to switching over to adult use. So, well see if that one comes forward. That is going to leave one more available. The city will do an RFP (Request For Proposal) for that one spot that would be left and people can apply.” (Click here for an earlier story regarding the Bract House).

The addition of a microbrewery in the Legends Books, Antiques and Soda Fountain in downtown Sonora was also approved by a 5-0 vote. Kellogg praised the move by the local owner Kenneth Hedges who she says also owns the Little Roots Toy Shop nearby. We asked with several breweries already in the downtown area, could Sonora become a micro-brewery tourist destination.

Kellogg replied, “Yeah, it appears to be that way and they are very popular. The city loves diversity and loves to see a lot of different things come into our downtown. It’s a great mix of what we have available for people when they come to visit.”

The design and site plan for a new building at the Downtown Plaza Shopping Center on Stockton Street, housing apartments and retail shops also garnered a 5-0 approval. Further details on the building can be viewed here. Noting that it is “nice to see that part of downtown getting revitalized,” Kellogg praised the project, stating, “It’s a great multi-use of property to where we can increase our housing and still preserve our commercial areas.”