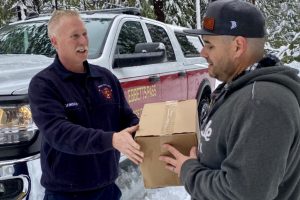 Update at 12:20 p.m.: Citing the damage was beyond the ability of county services, Tuolumne County supervisors voted to declare a Local State of Emergency on Friday, but Calaveras officials are waiting to see what Monday’s storm brings before declaring an emergency.

As reported below, Clarke Broadcasting asked Calaveras County officials whether they would proclaim the same declaration yesterday, but did not hear back until now. Calaveras Office of Emergency Services Director John  Osbourn tells us that it is an ongoing conversation. He says currently they are fairing rather well. Once they get to a place where services cannot be sustained and outside assistance is needed, an emergency will be declared, according to Osbourn. However, he says the determining factor will be how much crews get done in the next 48 hours before a new snowstorm blows into the region last Sunday into Monday, as reported here.

“That will be our next touchpoint to discuss whether or not we are able to sustain a response without assistance from the region,” indicates Osbourn. “There are a lot of people working very hard to ensure our residents are safe and remain healthy throughout this incident. We hope that we can continue to do that.”

Osbourn shares that their county partners including Murphys and Ebbetts Pass fire, Calaveras Sheriff’s Office, the Red Cross, and PG&E have helped them meet the response needs, as seen in the image photo. He adds that PG&E has 65 crews working around the clock in the county, some coming from as far away as Idaho, and today snow removal equipment has arrived to speed up the process.

Original post at 6:25 p.m. Friday: Sonora, CA – This week’s winter storms wreaked havoc on Tuolumne County, causing the board of supervisors to declare a Local State of Emergency citing the existence of “extreme peril to the safety of persons and property.”

The proclamation was voted on at a special meeting held this afternoon with supervisors delegating authority to the County Administrator to take actions to procure contracts for the necessary equipment, services and supplies needed for storm cleanup without giving notice for bids.

In recommending the declaration, staff relayed that the significant snow and wind sent power lines, trees and debris crashing to the ground. That limited emergency and utility services reaching the hardest hit area east of Twain Harte along the Highway 108 corridor where some residents remain trapped in their homes. They noted that the public works department “does not have the resources to address all these issues in a timely manner.”

The board’s approval also authorized up to $50,000 to respond to this emergency, which will be funded by the General Fund Contingencies. Click here to view the emergency declaration.

Calaveras County also saw widespread damage from the winter storm in the Arnold area, as earlier reported here. Clarke Broadcasting reached out to county office of emergency services officials regarding whether an emergency declaration would be enacted, but we have not yet received a response.