Deep Snow In Arnold Has Many Calling For Help 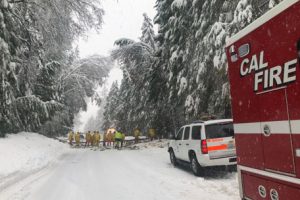 Downed tree on Highway 4 in the STF

Arnold, CA – A flurry of calls requesting a check on loved ones stranded in the Arnold area by the recent winter storms that dumped more than five feet of snow has Calaveras County Sheriff’s Deputies working overtime.

While sheriff spokesperson Sgt. Greg Stark disclosed that there have been no physical rescues of residents, he adds that with no electricity, there is no phones or cell coverage, causing concern of people being either stranded or needing assistance.

“We have two deputies up there in side-by-side utility vehicles that are equipped with tracks that allow them to access some of these areas impacted by the snow. So, they’re checking on people making sure they have food, water, obviously no power, but if they have any medical needs, getting medical attention to them,” detailed Stark.

There has been significant property damage with trees into homes and vehicles. For those who can make it onto the roadways, Stark asks that they slow down and use traction devices were needed. He stressed, “Just be patient with the snowplow drivers. They are working very diligently and around the clock to clear those roads up.”

During the storm, the CHP also reported toppling trees and heavy snowfall closed Highway 4 at the Meko Drive intersection for several hours yesterday. Caltrans District 10 officials also pointed to those hazards for slowing down plows, with pictures in the image box showing the mess. Those same conditions are plaguing Calaveras County Public Works. Officials gave an update on its snow removal operations noting that plowing continues around-the-clock to reopen roadways throughout the high country. They ask the public to report any road-related issues to the numbers below:

As for sheriff’s deputies, Stark says, “We’re going to stay until the calls for service reduce and the roads open. So, we’re going to make sure that everybody that needs service, gets service. For the foreseeable future, we’re expecting Saturday the roads should be cleared up.”

With a smile and on a positive note, Stark adds, “The inconvenience of the snowstorm we are having now will be offset by the water storage that we’re going to gain from it.”