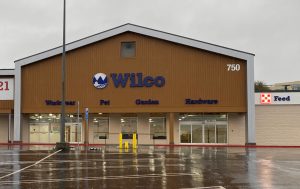 Update at 7 p.m.: Wilco Store spokesperson Jake Wilson responded to Clarke Broadcasting for more details regarding the 35 new jobs that are available. Regarding the types of positions and pay range, he detailed,  “We always pay above minimum wage, so roughly forty percent of the positions are full-time and then sixty percent are part-time.  Some of the position types would be like our department heads.”  He specified the pay range is minimum wage to over $45,000 salary jobs including department heads, clerks, stockers, and cashiers.

Wilson also noted that there may be more jobs available later, stating, “Thirty-five [jobs] is usually where we start a store and then as stores get busier over time we will typically add more. So, we have some stores that have up to 50-60 folks.”

The Sonora store was slated to open last year late summer into early fall, but Wilson says COVID-19 pushed back the date by 6-9 months with the opening now scheduled for sometime in April.  Further details on the store and applying for a job area below.

Original post at 3 p.m.:  Sonora, CA – Hiring is underway at the new Wilco Farm Store opening this spring in Sonora with 35 jobs available.

Already tapped as Store Manager is Sonora resident, Marcus Rodriguez. In a written press release, Wilco officials share that Rodriguez has a deep understanding of retail after many years of managing Walmart Stores.

“Our team is excited to open in Sonora where outdoor activities, pets and rural lifestyles are strong within the community,” said TJ Colson, Wilco VP of Store Operations. “And it’s fitting to be in the former Orchard Supply facility because we offer many of the same hardware products that combine with the offering farm stores are known for,” Colson added.

The retailer announced their plans to fill the vacant Orchard Supply Store at the Sonora Plaza Shopping Center on Mono Way in January of last year, as reported here. The farmer-owned cooperative based out of Oregon says its mission is to strengthen agriculture and rural lifestyles. The Sonora store will offer farm/feed, hardware and fencing supplies. It also has work clothing and boots, livestock gear along with pet supplies and grooming. Those interested in applying for positions at the store can click here.

“We have lots of openings to fill,” said Colson. “We look forward to building our team, and welcoming customers in April.”

Clarke Broadcasting reached out to Wilco officials regarding more details on the 35 jobs that need to be filled and the pay range but have not yet received a response.

The Sonora store is the 23rd overall location throughout Washington, Oregon and California. It is the second location to open in California. Wilco officials say it is unique because it features a covered drive-through warehouse with free pickup for any online orders.