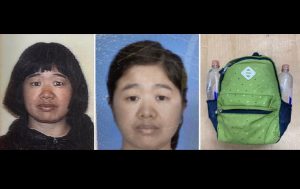 Yosemite, CA — Yosemite National Park is seeking information from the public about a hiker who went missing late last week.

41-year-old Yu Xie, who also goes by the name Alice, headed on a day hike to the Upper Yosemite Fall overlook on January 14 or 15, and has not been seen since. Anyone who traveled to the top of the trail one of those two days, or who may have information on her whereabouts, is asked to call the Yosemite Emergency Communications Center (209-372-0216 during business hours or 209-379-1992 after hours).

She is five feet tall and weighs less than 100 pounds. Yosemite officials report that she traveled to the park from Mariposa on the YARTS bus on January 14 and is a Chinese National living in the United States.