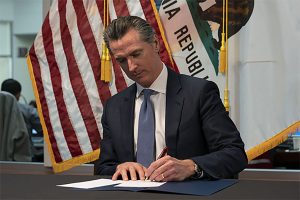 Sacramento, CA — A group trying to recall Governor Gavin Newsom has received about half of the 1.5-million signatures needed for a special election.

Recall advisor Randy Economy told the Associated Press that interest increased after it was revealed that Newsom dined with friends at an upscale Napa Valley restaurant while asking state residents to stay home and physical distance.

Recall proponents have until mid-March to acquire needed signatures. The last California Governor to be recalled was Gray Davis in 2003 when he was replaced by Arnold Schwarzenegger.

The coronavirus pandemic has created challenges for Governor Newsom over recent months, and much of the state is now under a stay at home directive. Of note, Newsom made some changes in his administration last week. Capitol insider Jim DeBoo was hired to be his new senior advisor and Dee Dee Myers, former Press Secretary for President Clinton, was appointed Director of the Governor’s Office of Business and Economic Development.