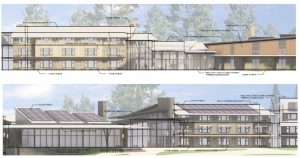 Groveland, CA — A resort project in southern Tuolumne County has gained the support of the planning commission.

The Terra Vi Lodge Yosemite calls for the construction of 140 guest rooms, 25 cabins, a market, and a lodge near the intersection of Highway 120 and Sawmill Mountain Road.

At the end of a nearly five-hour-long meeting last night, the commission voted to certify the Environmental Impact Report and issue a site development permit.

Community Development Director Quincy Yaley says, “We had approximately 40 members of the public speak about the project, several were in favor, but most in opposition.”

The final vote was 6-1, with commissioner Larry Biel the lone no vote.

Moving forward, Yaley says, “Unless there is an appeal, the project’s discretionary review period is over and they can move forward with any grading or building permits. However, I do expect an appeal to be filed for this project which would then take the matter in front of the board of supervisors, and they would then become the final decisionmakers.”

We reported two weeks ago the planning commission also approved plans for the nearby Yosemite Undercanvas glamping project, and Yaley confirms that it has now been appealed to the supervisors. Tentatively, the board is planning for a special meeting on December 17 to hear that appeal.