A Lockdown At A Sonora Pre-school After Alleged Kidnapping Attempt 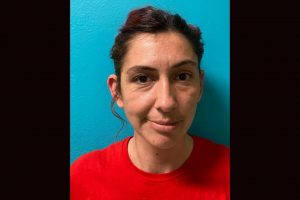 Sonora, CA – A scary scene at a Sonora pre-school after a woman allegedly attempted to kidnap kids in a playground, forcing a lockdown.

Officers were on the scene in less than a minute on Monday morning after receiving a call that a woman was climbing the schools’ fence. Sonora Police would not disclose the name or location of the pre-school. Officer Thomas Brickley details, “To our knowledge she was trying to get over the fence, she never actually made it over the fence. Once the school staff saw her trying to climb the fence, they put all the children inside the school on lockdown. She was already down from the fence and attempting to leave the area when our officers got there.”

The suspect, 38-year-old transient, Stephanie Grimaldi refused to follow an officer’s commands and a struggle ensued. At one point, police say she tried to get the officer’s gun, but he was able to subdue her long enough to slap on the handcuffs.

Further questioning of the staff revealed that Grimaldi was trying to entice the children to leave the playground. Brickley recounted, “At one point, it did sound like she was making calls out to the children to get children to come towards the fence. I don’t know verbatim what she was saying.”

Police would not disclose Grimaldi’s motive and the school was only on lockdown for about ten minutes. It is unclear whether drugs or alcohol played a role in the incident. Grimaldi was arrested for attempted kidnapping, resisting arrest with violence, attempting to take a police officer’s firearm, interfering with radio transmissions, false ID to a police officer, and prowling. Her bail was set at $50,000.

Regarding whether Grimaldi had any accomplices or possible threats to area schools, Brickley stated, “I don’t believe there is going to be an ongoing threat. I believe her arrest is going to end this. It was just an isolated event.”

The officer involved in the fight with Grimaldi was treated at an area hospital for non-life-threatening injuries.