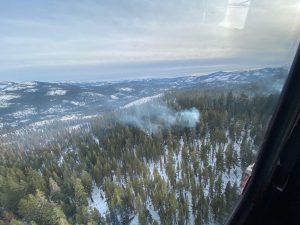 Yosemite, CA — The recent snow in the higher elevations has been very beneficial to slowing a pair of wildfires in Yosemite National Park.

Containment is now estimated at 90-percent on both the 6,900 acre Blue Jay Fire and 2,000-plus acre Wolf Fire. Both were ignited over the summer by lightning, and are situated at elevations of about 9,000 feet. Yosemite officials report that fire behavior has been very minimal this week, with light smoldering in some areas. Firefighters have been using natural barriers to slow the spread of the fires. More precipitation is anticipated in the Sierra Nevada today.

The fires are located near the White Wolf Campground and Lukens Lake Trail.