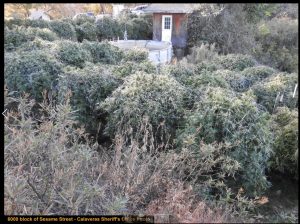 Mokelumne Hill, CA — Two people were arrested, and a third was cited, following a marijuana grow bust in the 6000 block of Sesame Street in Mokelumne Hill.

Booked into Calaveras County Jail for illegal cultivation, conspiracy to commit a crime, obstruction of a peace officer, and other offenses, were 24 year old Nicholas Dale Isaacs and 35-year-old Phillipe Isaac Sanchez. Cited with lesser related offenses was 32-year-old Kyle Sharp. Both Sharp and Isaacs have a home address of Florida.