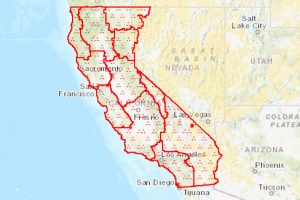 Sonora, CA – To accommodate variable conditions across the District, the Bureau of Land Management (BLM) Central California District has modified fire restrictions, including the Mother Lode.

In August, the BLM imposed a no open flame and temporary target shooting limitations order, as reported here. The new changes reinstate seasonal fire restrictions, which allow campfires within designated campgrounds and recreational target shooting in some areas.

Seasonal fire restrictions can vary due to wildland fire risk with indicators such as vegetation moisture content, weather outlooks, human risk factors, and firefighting resource availability taking into consideration. BLM officials advise that anyone found guilty of violating a fire prevention order could be fined up to $100,000 and/or imprisoned for up to a year. Parties involved may also have to pay restitution for total fire suppression and damage costs incurred. Specific fire restrictions and an interactive map can be viewed here.

The new restrictions provided by the BLM below will remain in effect until further notice and are in addition to the year-round statewide Fire Prevention Order issued on April 28.

Due to extreme wildland fire danger, the annual vehicle closure for Panoche and Tumey Hills recreation areas remains in effect through Nov. 13. Seasonal fire restrictions, which include suspension of recreational target shooting, will remain in effect.

Bakersfield and Bishop Field Offices: Target shooting is generally allowed, if it is done in a safe manner, without damaging natural resources or improvements. Shooting is strictly prohibited in developed recreation sites and other areas where posted.