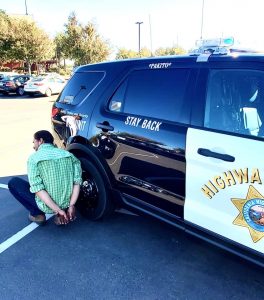 Sonora CA — The alleged murder suspect that has been on the run for over a week after running down a Sonora man in Jamestown has been caught.

The CHP details that suspect Dylan Colby Moyle was spotted in a 2006 Jeep in the Manteca area.  At around 3 p.m. on Tuesday Central Division CHP Investigative Services Unit apprehended him without incident. Moyle was booked into the San Joaquin County jail and remains there this evening. He is accused of running down 42-year-old Matthew Winks with his pickup truck on October 3, at the intersection of Fifth Avenue at Seventh Street in Jamestown.

Last week, the CHP reported it as a “suspicious death” and asked for the public’s help to find a 1998 Ford F-150 they believed was involved in the hit and run, as reported here. Then on Saturday, the CHP sought the public’s assistance again, disclosing that they were looking for Moyle in connection with the hit and run, as detailed here. Investigators also revealed that the suspect’s truck was found by the U.S Department of Forestry in the Twain Harte area, and it was seized for evidence. Additionally, footage from several surveillance cameras around the murder scene along with multiple witnesses ’ testimonies, had provided enough evidence for a murder warrant for Moyle.

As part of the investigation officers discovered that in the week prior to Wink’s death, Moyle had made a similar attempted to run him down. The CHP adds that others who may have assisted him with covering up the crime are being sought as well.