Update: Truck Being Sought In Connection With Suspicious Death In Jamestown 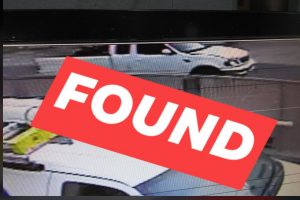 Update at 2:45 p.m.: The CHP is releasing more details surrounding a “suspicious” death in Jamestown on Saturday night. CHP spokesperson Steve Machado tells Clarke Broadcasting that at around 6:50 p.m. officers responded to a hit and run in that area of 5th Avenue and 7th Street in Jamestown. Upon their arrival they found 42-year-old Matthew Perry Winks deceased.

“Officers began gathering evidence that led them to believe that Wink’s death was suspicious, details Machado. He adds, “We don’t know why it happened or if it was an intentional act. Again, we’re still trying to put the pieces together of why it happened and who was driving.”

Machado confirmed that there have been no arrests in the case and that a Ford F-150 pickup located this afternoon was the truck being sought by investigators in connection with the hit and run, as detailed below. However, when asked where it was found and if it was abandoned, he declined to comment. Also, he noted that alcohol or drugs are not suspected to have played a role in the collision.

As the investigation is ongoing, anyone with information about this incident can remain anonymous by calling the CHP Merced Communications Center at (209) 356-2900 and request to speak to Investigator A. Palazuelos.

Update at 1:50 p.m.: The Sonora Unit CHP reports that the Ford F-150 pickup being sought in connection with a “suspicious” death has been located, but would not release any additional details on how or where it was found and if anyone was arrested. After inquiries from Clarke Broadcasting, CHP spokesperson Steve Machado detailed that the death occurred on Saturday (Oct. 3) night in the area of 5th Avenue and 7th Street. Machado added that the deceased is 42-year-old Matthew Perry Winks but would not release any additional information on how he died as the investigation is ongoing.

Original post at 1 p.m.: Jamestown, CA – The Sonora Unit of the CHP is seeking the public’s assistance in locating a truck linked to a suspicious death in Jamestown.

Investigators released little information regarding the death, only revealing that it happened around 5th Avenue and 7th Street and not giving a date. They also did not indicate why the death was being considered “suspicious.” The picture in the image box is the white 1998 Ford F-150, with California license plate 8D44514 that detectives are seeking. They add that the vehicle will have damage to its right front and possibly its tailgate, which could also be completely gone.

The CHP details, “Investigators believe the vehicle is being concealed or attempting to be disposed of. This is the only information we will be releasing at this time.”