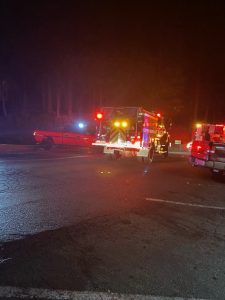 wain Harte, CA – The CHP is releasing new information and the identities of those involved in a pickup versus motorcycle crash last Saturday where the rider was flown from the scene.

The collision happened just before 8:30 p.m. on Twain Harte Drive, as earlier reported here. The CHP reports that 40-year-old Mark Edward Thompson of Livermore was riding a Harley Davidson motorcycle westbound and east of Joaquin Gully Road. Traveling in the opposite direction in a Ford pickup was, 39-year-old Kelly Ryan Quashnick of Tuolumne. Sonora CHP Unit spokesperson Officer Steve Machado details, “Mr. Quashnick slowed his vehicle and began making a left turn directly in front of Mr. Thompson.  As a result, Mr. Thompson’s motorcycle collided with the left side of the pickup. He was ejected from the bike, resulting in major injuries. After the impact, the motorcycle then crashed into a parked pickup.”

Thompson was flown to a Modesto hospital whereupon further investigation he was arrested for drunk driving. Quashnick was not hurt in the collision.