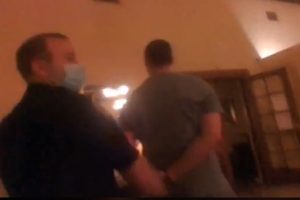 Sonora, CA – The sound of breaking glass recently in the early morning hours could be heard in the halls of a downtown Sonora hotel prompting a call to police.

When officers arrived at the Sonora Inns on South Washington Street to investigate, witnesses told them that a man had allegedly run down several hallways, hitting and shattering glass doors, windows, and other fixtures. Police began to do a sweep of the hotel and found the suspect, 31-year-old Clayton F. Johnson of Sonora,
hiding behind a corner in a hallway and armed with a fire extinguisher.

When officers approached Johnson, police say he sprayed the fire extinguisher at them. He then pulled the fire alarm and retreated deeper into the hotel hallways while spraying the extinguisher, filling the first and second floors of the hotel with a cloud of retardant.

Shortly after Tuolumne County Sheriff’s Deputies arrived to offer back up, Johnson gave himself up and was taken into custody without further incident. He was booked at the Tuolumne County Jail for felony obstruction of a peace officer, felony vandalism, tampering with fire protection equipment, sounding a false fire alarm, possession of methamphetamine and heroin, and violation of probation. His bail was set at $20,000.