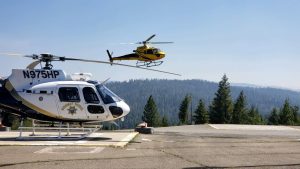 The first rescue was on August 27 in the Glen Aulin area. A backpacker used a satellite messenger device to notify officials of a “snake emergency.” It was in regards to someone else who was fishing barefoot in the Grand Canyon of the Tuolumne River. The man, in his mid-30’s, stepped on a rock, causing it to shift under his weight, and a rattlesnake bit him on his left foot. The man was unable to hike out, and his wife pinned their location on her cell phone, so that it could provide exact coordinates to emergency officials. Yosemite’s helicopter was already dispatched to a fire assignment at the Point Reyes National Seashore, so the CHP sent a helicopter to rescue the bite victim. He was treated for dehydration, nausea and pain, and was given two doses of antivenom.

The second incident occurred a few days later a few miles up the Chilnalna Falls Trail in Wawona, where a group was hiking up steep terrain. A rattlesnake reportedly struck one of the hiker’s knees right when the trail was apparently level with a steep uphill slope on the left side.

Park officials report, “After he realized he had been bit, the subject saw the snake, including a rattle on its tail, making its way on and off the trail and heading downhill towards his hiking companions. The fellow hikers backed up until the snake left the area, and then they approached the subject. They helped him hop to a flat place to sit down; another hiker reached the scene, had cell service, and called 911.”

Initially, the friends put a tourniquet on the victim’s leg, but were told by first responders on the telephone to remove it immediately, because it could lead to tissue damage. A helicopter rescue helped bring the man to safety. He was found to be dizzy, nauseous, with a fast heartbeat and low blood pressure.

The bite victims, from both incidents, stayed multiple days at valley hospitals.

Yosemite officials report, “This summer season, there has been a noticeable uptick in rattlesnake bites in the greater Yosemite region. These two cases provide a good opportunity to review advice for how to handle an encounter with a rattlesnake.”

-Keep your distance. Rattlesnakes can strike only a distance equal to half their own length.
-Watch where you step or reach with your hands. Use extra care when opening and closing food lockers.
-Stand still if you think you hear a snake. As soon as you’ve located the snake, move away.
-Beware of snakes without a rattle—baby rattlesnakes don’t have rattles and adult rattles can break off.
And, finally, some do’s and don’ts if you are bitten by a rattlesnake: