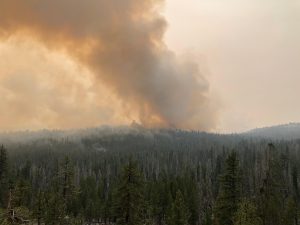 Yosemite, CA — A lightning-caused fire in Yosemite has notably grown in size over the past week.

The Blue Jay Fire was ignited by lightning on July 24 and officials have been working to use natural barriers like granite when trying to slow the spread. The fire is in an isolated area of wilderness along the south side of Tioga Pass. The fire is 3,132 acres and there is 30-percent containment. A week ago today, the fire was only 508 acres. The fire is active along 70-percent of the perimeter.

It is located four miles south of White Wolf campground and one mile west of Lukens Lake Trail. The incident management team, comprised of 39 firefighters, is conducting burnout operations to help build containment lines, and this is putting up some heavy smoke nearby. No structures are considered threatened.

Also in Yosemite, The Wolf Fire, one mile north of White Wolf Campground, is now 704 acres and there is no containment. A week ago is was 494 acres. It ignited on August 11. 10 firefighters are assigned to the incident and it is burning actively along 60-percent of the perimeter.